From their ancestors, they inherited the strength and richness of their Savoyard roots. From their parents, they received a sense of effort, a taste for a job well done. A living and vibrant heritage that René and Marie-Louise have embodied for 40 years and that they passed on to their children, Sophie and Maxime, and to all those with whom they work. A family epic The story begins in 1976, when René and Marie-Louise acquired a field of potatoes in Saint Marcel (Saint Martin de Belleville). With family cabinetmaking know-how, they create with their own hand La Bouitte, ‘little house’ in Savoyard dialect. Raclettes and Savoyard fondues are followed by more elaborate dishes. In 1981, a dinner at Paul Bocuse’s marked a turning point and revealed their vocation. René, who has had no academic training in cooking, sets out to conquer the highest peaks.

He was joined in 1996 by his son Maxime, also self-taught. Both will progress together, forging unshakeable bonds and driven by the same desire to always go higher. 2003, first distinction with the Michelin star. A lot of work, a quest for perfection, attention to detail, and in 2008, second star! Then in 2015, it was the consecration with the third star, a historic first in Savoy. In the meantime, the whole of La Bouitte has progressed: the hotel has become a 5-star Relais & Châteaux, supplemented by the Spa ‘La Béla Vya’. The House has become a benchmark while keeping its soul and identity.

A wonderfully cozy atmosphere in the Sophie suite, nestled under the roofs with high ceilings and superb exposed beams. The view overlooks the mountains and the village of Saint-Marcel. From the bedroom to the living area via the bathroom, the old weathered wood recalls the warmth of houses in Alpine Savoy, imbued with the 5-star luxury of La Bouitte. 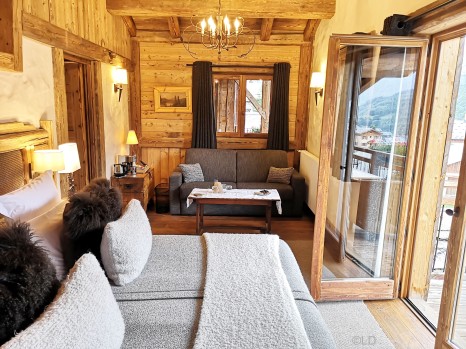 The colors play a harmonious and soft partition between blues and grays, which goes perfectly with the lime-effect wall sections and the wooden furniture. Above the bed a delicately painted bell; it bears the cross of Savoy, a historical emblem of this region. And the plush in the niche … a nod from the hostess, who is particularly fond of them. On the bedside table, there are two stylized chamois as a lamp base… not to mention the embroidered cow on the duffel !

The « La Béla Vya » Spa is the natural extension of the soul of La Bouitte, the natural and cultural heritage of the 3 Valleys, and the culinary signature of the Chefs. With a brand of cosmetics and exclusive tailor-made treatments, well-being takes on a unique dimension with ‘La Tanière des Marmottes’! The interior basin would be a high mountain lake! hay sauna, 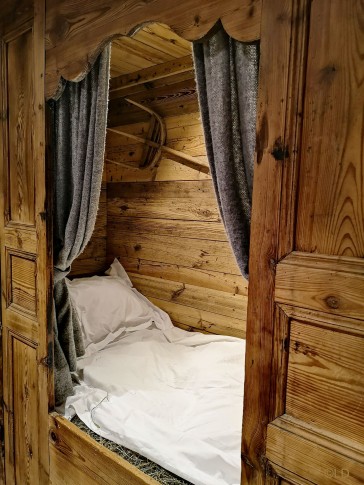 outdoor jacuzzi… Béla Vya, life is good, nature is everywhere magnified ! The Spa perfectly cultivates the simple and true pleasure of being there, in the protective heat of the stones of this Savoyard house, La Bouitte …

In the center of the room an imposing maie sets the tone. The same goes for the china cabinet which proudly displays a collection of old plates from the region, then next to the pottery which once treasured cream, oil, milk, vinegar and other everyday products. The bicentenary of Arpin’s spinning mill, with ancestral know-how, is in the spotlight: curtains, sofas, chairs and even clothing use the precious wools and linen of Bonneval, with inimitable warmth. La Bouitte offers itself as a dream mountain house, welcoming its guests with passion and sincerity. The topping is perfect, the beautiful crockery comes from local artisans, and the cutlery bears the coat of arms of Savoy. The windows bring in the unique light of the mountain skies. The spectacle of Nature in majesty accompanies the meal until the setting sun! And when night falls, the intimate atmosphere of the place is even sweeter. 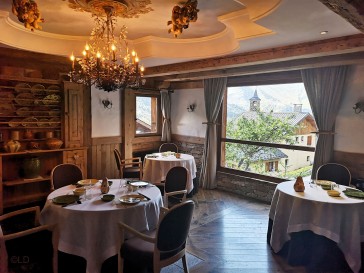 The baroque room, you only have to look up to the ceiling to understand where the name of this room comes from. Two charming sculpted cherubs frame the staff ceiling by Jean-Luc Ramasco in a baroque style. With in the center a chandelier with tassels. The desire is for refinement, without forgetting the warmth of the Savoy houses. The old plates and pottery, some dating back to the 18th century, the cutlery marked with the historic Savoy coat of arms and so many other details make the room as baroque as it is mountain vibrate! From the bay window, there is a beautiful perspective on the hamlet of Saint Marcel and the peaks of the wild valley of Encombres. Aperitifs: Gillardeau oyster, seawater veil, yuzu pearl, toasted bread. Logistical feat to have this seafood, served with exceptional freshness ! 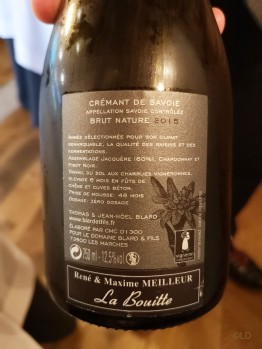 Mortadella to enjoy with your fingertips, gribiche sauce, squash seeds. Bricelet raclette with raw milk, dried ham powder. Superb proposition that this delicious Mortadella leaf, sweet, almost sweet… the Bricelet brings us back in an instant, to the mountains of Savoy, with the sweetness of its raw milk, greedy and generous. The two amuse bouche, are presented here ‘with pride’, raised, highlighted ! To accompany this delicious Crémant de Savoie cuvée Meilleur 2015 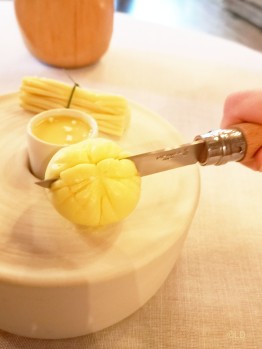 Magnificent trio of ‘homemade’ butter, cut in half, to reveal a core of magnificent mountain cheese in its center ! Presentation of the bread, which will be ‘broken’ in front of you, into four pieces, like a ceremonial ! Mass is said, dinner can begin.

Dos de Lapereau, rabbit’s back, pan-fried, tender shoulder, dauphine potatoes, sliced ​​wild thyme jus. More than a dish, more than a plate, this is a tornado of emotions! from the first bite of this divine cooking rabbit, time stops, the years are erased in a second, and here you are, in short pants, in the kitchen of grandmother Marie-Thérèse cooking the rabbit from ‘your childhood’! … This back of Lapereau is melting in the mouth, the sensations are intense, happiness is on the plate, here is a cuisine with a ‘crazy’ elegance, finesse and refinement are present at every moment, Taste, taste and even more taste ! Wow divine ! Merci Chefs 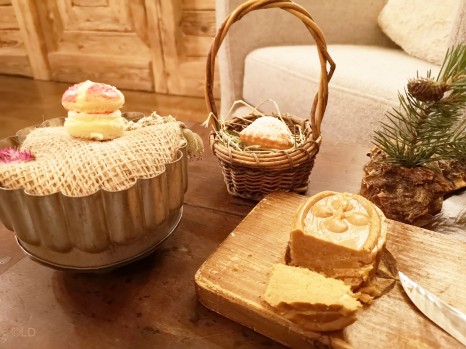 Pre-dessert, Peach and elderberry water served in the spirit of a beer, crunchy paper; Mignardises ‘biscuirons’ Gisele with orange blossom, ‘La Cruche’ saffron rissole, small pine cones, infused with fir. Very good idea, that this pre-dessert in the shape of a ‘beer’ with this delicious peach water, fragrant and creamy

Rhubarbe, Rhubarb, stewed, biscuit, ice cube, full rosehip fruit coulis, a dinner, it is of course, the moment of the dessert, where curiosity is very present, in spite of all the preceding dishes. ‘La Rhubarb’ is a total success! chic, elegance, visual, this dessert is light, we can guess the taste of rhubarb shavings on the palate, simply magical

La Terrasse, the panorama is splendid, 180o view of the mountain. In summer, with the scents of vegetation, plants and flowers, it is a calm and restful place to contemplate nature. You are placed in the center of a spectacular mountain ‘circus’. 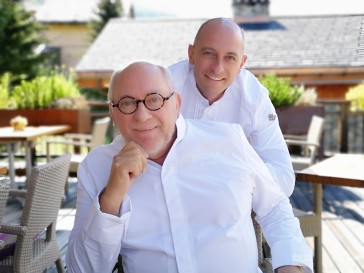 Since 1976, René and Maxime Meilleur, father and son, have fashioned with their own hands a unique chalet, an ode to Savoyard art, La Bouitte ! …’high standards, respect, passion and the pursuit of excellence are our values’… René Meilleur

Caressing and pure, their cuisine is the perfect balance between simplicity and elegance, delivering a chiseled and mischievous interpretation of the best local products. The wine list is huge. The lounges and bedrooms are delicious cocoons carved in wood, and the very attentive family welcome, make La Bouitte one of the most beautiful ‘Houses’ in France. ‘Merci de votre visite’ simplement…